Welcome to my website. I am a mathematician working at the interface between analysis, probability, and geometry, and a postdoctoral researcher at the Institute of Science and Technology Austria (ISTA) in the group of Jan Maas.

At present, I am principal investigator of the project Configuration Spaces over non-smooth Spaces funded by the Austrian Science Fund (FWF) under the Esprit Programme.

Previously, I obtained my doctoral degree at IAM Bonn, in the group of Karl-Theodor Sturm. I completed my bachelor and master studies in mathematics at Sapienza University in Rome, under the supervision of Adriano Pisante.

At ISTA I have been a member of the Sfb 65 Taming Complexity in Partial Differential Systems and at IAM of the Sfb 1060 The Mathematics of Emergent Effects in project B03 Optimal transport and random measures. I am currently a member of the DFG Priority Programme SPP 2265 in project 15 Random Riemannian Geometry.

My CV can be downloaded here.

We construct a canonical diffusion process on the space of probability measures over a closed Riemannian manifold, with invariant measure the Dirichlet–Ferguson measure. Together with a brief survey of the relevant literature, we collect several tools from the theory of point processes and of optimal transportation. Firstly, we study the characteristic functional of Dirichlet–Ferguson measures with non-negative finite intensity measure over locally compact Polish spaces. We compute such characteristic functional as a martingale limit of confluent Lauricella hypergeometric functions of type $D$ with diverging arity. Secondly, we study the interplay between the self-conjugate prior property of Dirichlet distributions in Bayesian non-parametrics, the dynamical symmetry algebra of said Lauricella functions and Pólya Enumeration Theory. Further, we provide a new proof of J. Sethuraman’s fixed point characterization of Dirichlet–Ferguson measures, and an understanding of the latter as an integral identity of Mecke- or Georgii–Nguyen–Zessin-type. Thirdly, we prove a Rademacher-type result on the Wasserstein space over a closed Riemannian manifold. Namely, sufficient conditions are given for a probability measure $\mathbb{P}$ on the Wasserstein space, so that real-valued Lipschitz functions be $\mathbb{P}$-a.e. differentiable in a suitable sense. Some examples of measures satisfying such conditions are also provided. Finally, we give two constructions of a Markov diffusion process with values in the said Wasserstein space. The process is associated with the Dirichlet integral induced by the Wasserstein gradient and by the Dirichlet–Ferguson measure with intensity the Riemannian volume measure of the base manifold. We study the properties of the process, including its invariant sets, short-time asymptotics for the heat kernel, and a description by means of a stochastic partial differential equation.

My current research focus is on the Dirichlet-forms approach to Markov diffusions on non-flat infinite-dimensional spaces, in particular Wasserstein and configuration spaces. 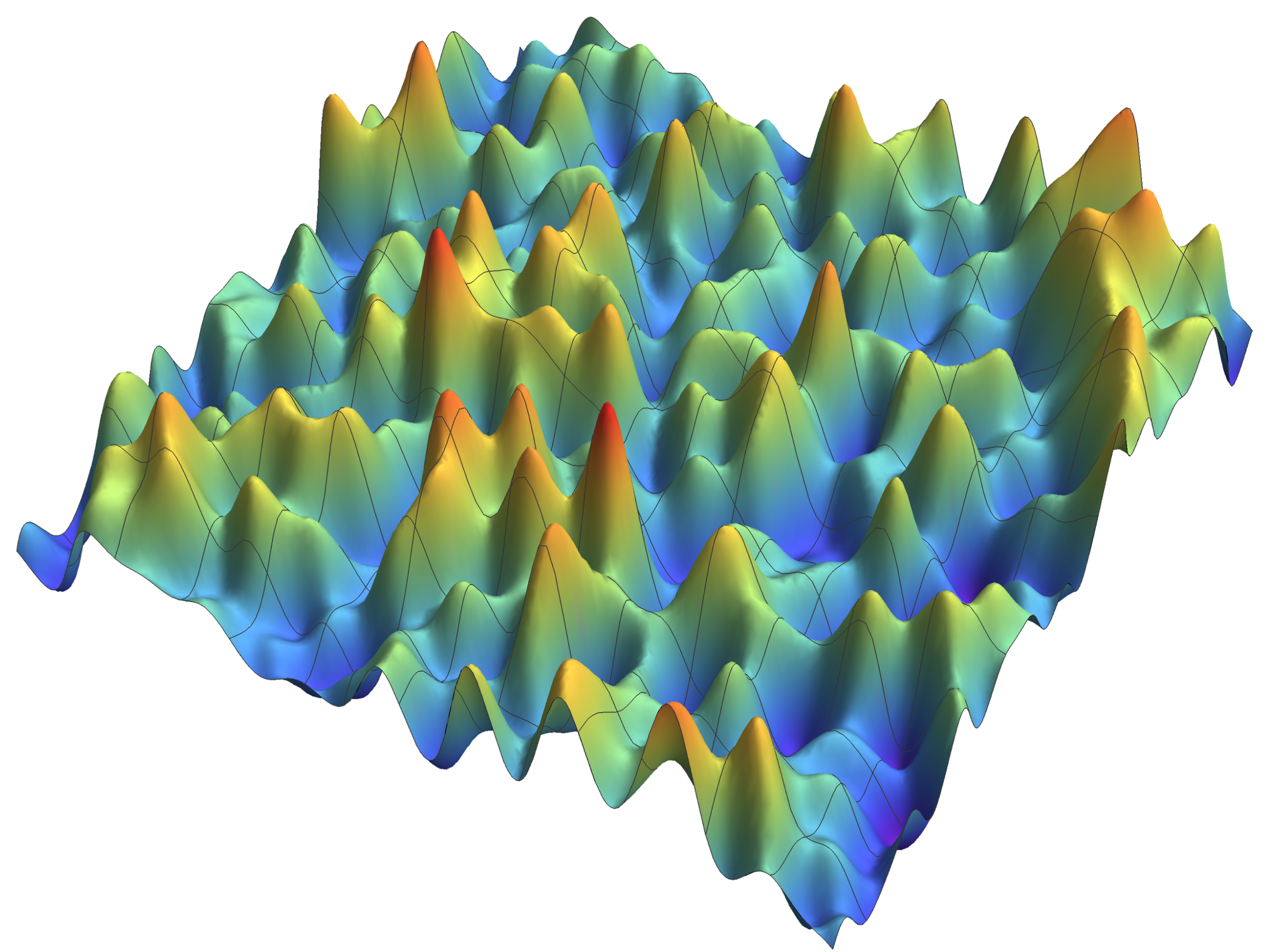 Together with Ronan Herry, and PIs Eva Kopfer, and Karl-Theodor Sturm, I am a member of Projekt 15 Random Riemannian Geometry within the DFG Priority Programme SPP 2265. We are studying Liouville Quantum Gravity on closed Riemannian manifolds $(M,g)$ of even dimension $n\geq 2$. In order to obtain a conformal field theory, we replace the standard Laplace–Beltrami operator with its conformally covariant counterpart, the Graham–Jenne–Mason–Sparling operator of critical order $n/2$.

Analysis and Geometry on Spaces of Measures

I am broadly interested in the interplay among analysis, stochastic analysis, and (metric measure) geometry on spaces of measures, and in particular spaces of probability measures and spaces of configurations. 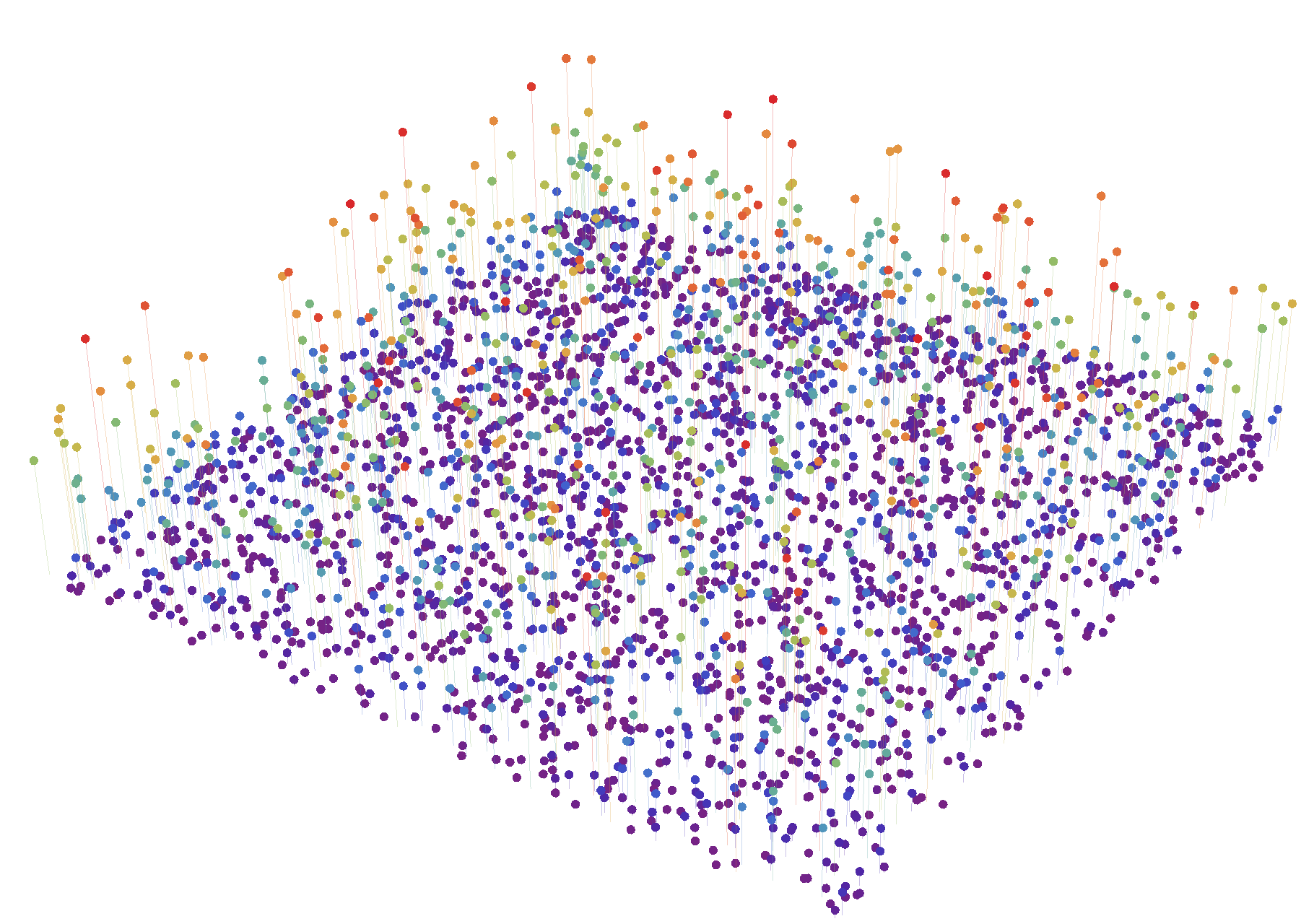 a $\mathcal{D}$-typical measure on the square

Probabilities measures.  My PhD thesis contains two constructions of the Dirichlet–Ferguson diffusion on the $L^2$-Wasserstein space $\mathscr{P}_2(M)$ over any closed Riemannian manifold $(M,g)$ of dimension $d\geq 2$. This process can be regarded as the canonical diffusion process induced by the geometry of $\mathscr{P}_2$ and by the Dirichlet–Ferguson measure $\mathcal{D}_{m_g}$ with intensity measure the Riemannian volume $m_g$. It is the multi-dimensional analog of Konarovskyi's Modified Massive Arratia Flow, but no coalescence occurs, by reason of the dimension of $M$. The construction required a thorough study of the Dirichlet–Ferguson measure, and a Rademacher-type theorem for general measures on $\mathscr{P}_2(M)$.

Configurations.  Together with Kohei Suzuki, we are developing a comprehensive analytical and geometric framework for the study of diffusions on the configuration space $\Upsilon$ over a metric measure space $(X,d,m)$. Typically, $\Upsilon$ will be endowed with a quasi-Gibbs probability reference measure $\mu$ and with the $L^2$-transportation distance $d_\Upsilon$ induced by $d$. As a first cornerstone in the theory, we show that ― under quite general assumptions on $X$ and $\mu$ ― the metric measure structure of $(\Upsilon,d_\Upsilon,\mu)$ coincides with the Dirichlet space structure on $\Upsilon$ inherited from $X$.

ESPRIT Project 208.  I am principal investigator of the project Configuration Spaces over non-smooth Spaces funded by the Austrian Science Fund (FWF) under the Esprit Programme, with Jan Maas as my mentor.

Part of my research is focused on abstract Dirichlet spaces, approached in full generality. The main contributions are: the construction of ergodic decompositions for general quasi-regular strongly local Dirichlet spaces; a study behavior of these decompositions under the action of order isomorphisms (with Melchior Wirth); a study of the metric properties of intrinsic distances, and in particular of the Rademacher and Sobolev-to-Lipschitz properties, and of Varadhan integral-type short-time asymptotics for the heat semigroup (with K. Suzuki).

During my master studies, my main interests lay in optimal transport and second-order elliptic PDEs in divergence form. Also, I was a member of Adriano Barra's research group on biological cybernetics.

Every Demonstration undergoes a rigorous review process that checks for quality, clarity and accuracy with standards similar to those of traditional academic publications.

from the WDP FAQs